Git - How to drop a commit in history?

Back after a while with another git magic. We already have seen how to get rid of the top most commit in this article -> Git magic - Make commits disappear

First of all, it's one of the not so recommended way of doing it and more than that, it can only get rid of sequential commits from latest. I recently happened to get into a scenario where I had to drop a commit in the history by keeping the latest ones. As part of that exploration, presenting you this article.

/**
* @disclaimer
* Please read this post fully before executing any command. My scenario might not be same as yours.
*/

To my greatest surprise, I didn't know a git rebase could do this. Please continue to read to know how. The steps are simple,

Let me explain step by step.
1. Look at the commit log & count commits
This is the first step. First let's list the commits using the following command,
> git log --oneline

In the above commit list, let's say, I want to drop the following commit,

f1be775 build: add wctr to mocha exclude and webpack include

It's 4th commit from the top and since we are dropping that commit, let's take the count as 5.

2. Do an interactive rebase

This is the last and final step where we will do an interactive rebase to drop a commit from the history. 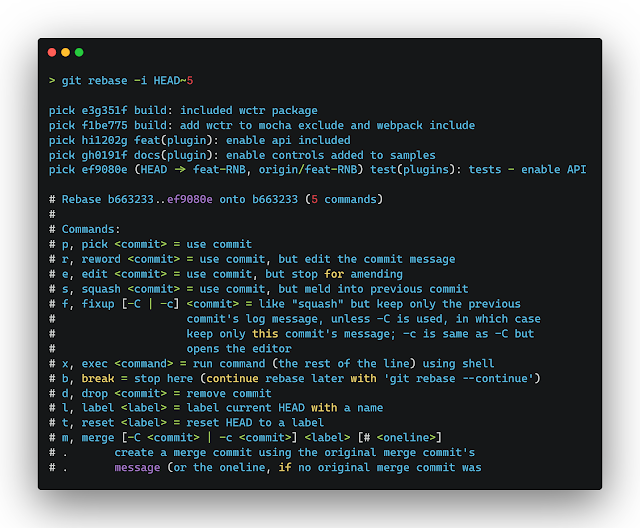 In the command, the option -i indicates interactive rebase. Vim or any other assigned editor opens with the above content and if you carefully see, the chosen 5 commits are shown in the reverse order.

Now carefully decide what are all the commits you need to drop and change the command from pick to drop in the editor you see, like below. 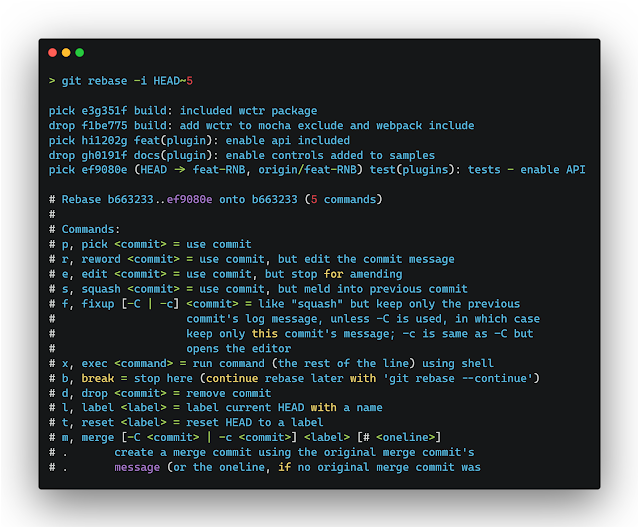 Save and close the editor. At this point, you might get into situations where conflicts happen because of the commits you dropped.

Do this until you get a Successful rebase message and you're all done. Now, the commits that you mentioned drop in the interactive rebase would have gone from the history.
Being that said, with so much commands in the interactive rebase like reword, edit, squash, fixup it's a pure magic and we'll see about each one of them in the upcoming articles.

Published on Friday, May 06, 2022
Over the past few weeks, I happened to work on stuff that enabled me to understand what WebRTC is and how useful it is.  The full form? Web R eal- T ime C ommunication The history It's first release was by 2011. If you want to know more, well, please read the wikipedia . WebRTC  has been a boon to web developers who want to build streaming applications or video calling applications. As you move downward, you'll just may be understand how WebRTC works but nothing technicals.  The story Let's begin with a short story. Long long ago, so long ago, nobody knew how long ago, there lived two shop keeper farmers John & Finch. It was that old point in time when barter system was a thing and money wasn't invented.  These shopkeepers lived in different cities across a river and the cities were connected by a rock solid bridge. Like how the golden gate connects the San Francisco city and the Marin County. Finch is a very private person and takes hard time to trust people. John
2 comments
Read more